I've got a lot of things to do today, why this will be in two parts, but before I head out I wanted to take a moment and discuss Halloween decorating. 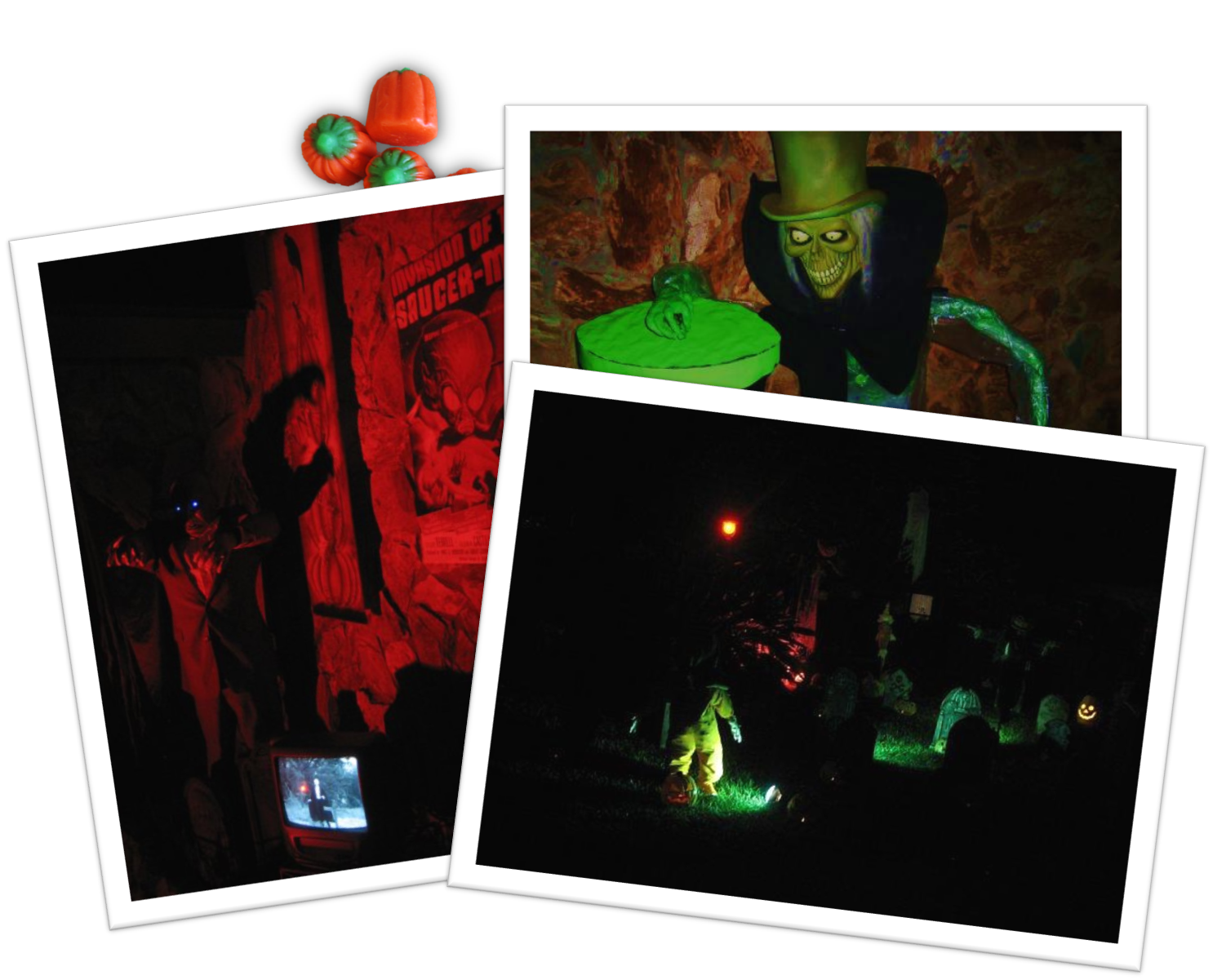 The Midnight Coterie of Sinister Intruders

Saturday Night Live has become hit or miss for me in the last couple years. Now, with the departure of the Lonely Island guys and the dwindling regularity of memorable digital shorts, I only look forward to one recurring sketch at this point: 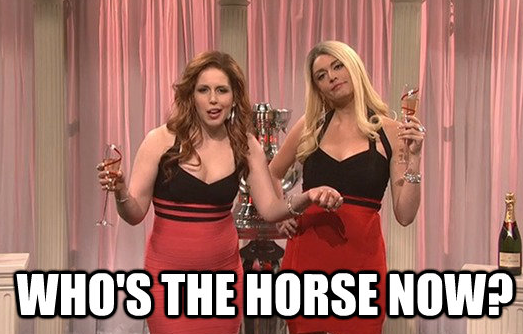 Then last Saturday SNL produced what I feel is the most orginal and sharp digital short they have made in years. I presented here now, in tribute to our own Marc. C's birthday, the newest name in horror (watch and then I'll meet up with you below): 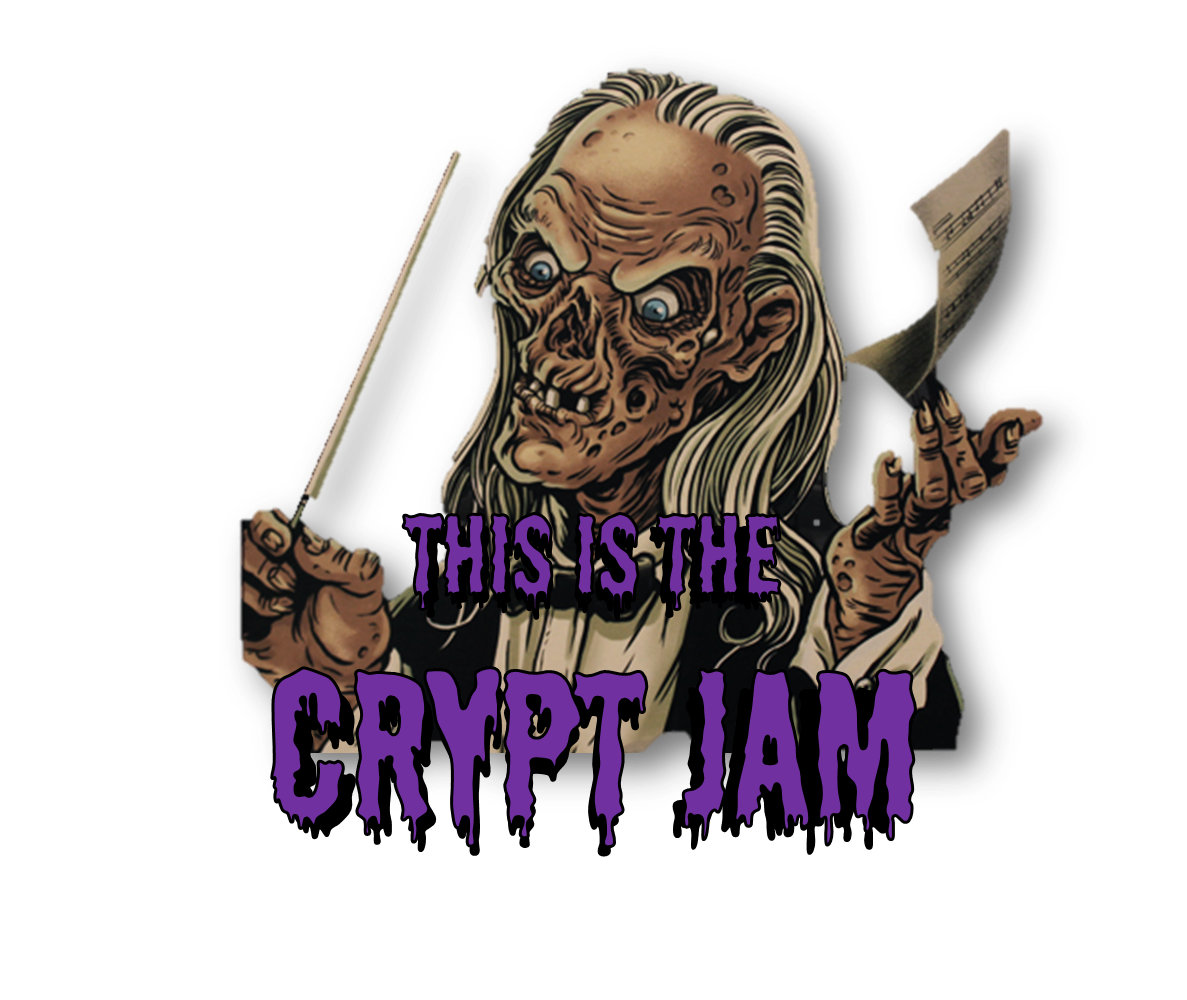 Oh Mondo. I've never been in an tumultuous relationship but I'd imagine it is similar to the relationship I have with the uber-popular print maker. It continues to infuriate me, making me rant and rave to no end, yet I keep on coming back.

I guess I just can't quit you Mondo.


I of course do not mean to belittle anyone
who has been in an abusive relationship
and in no way say they are parallel.

Stay safe out there.

Why I bring this up is because  of the limited edition vinyl Mondo will be releasing soon in accordance to thier upcoming gallery show "It Didn't Rot Our Brains".

With Halloween fast approaching I thought I'd take a moment and think fondly back to a time when everything gross, slimy, and disgusting was up for grabs.
I'm of course talking about the 80s and the 90s.
Yes, that simpler time when every toy company and television station knew what the children of the world wanted and what they wanted was filth. I of course mean filth in the finest way possible. Sick was in and we ate it up. We had Gak, Slime, Madballs, Boglins, My Pet Monster, Supernaturals, Dr. Dreadful, MAD Scientist Playsets, and the Inhumanoids. The list could go on for another ten pages but let's skip to what were here to discuss, the king of the creepy crop: Garbage Pail Kids. 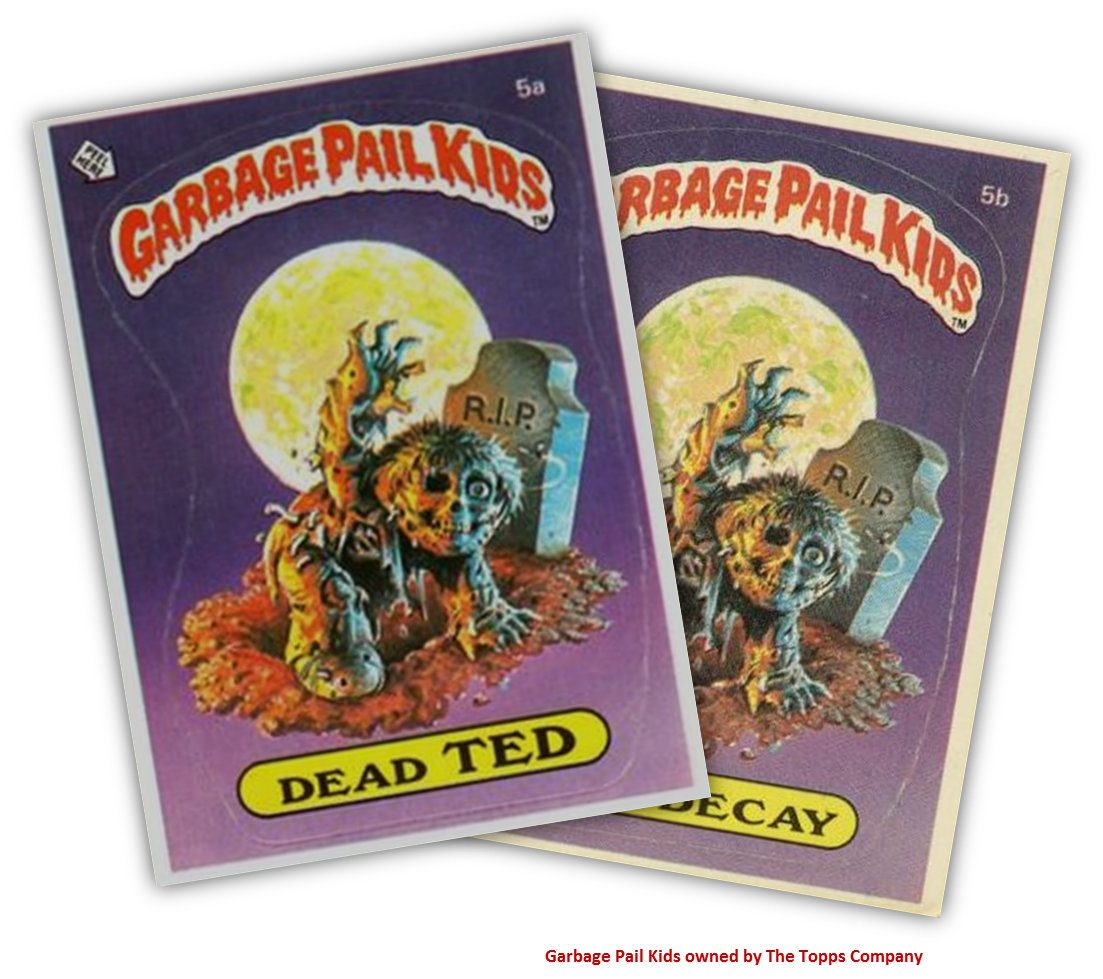 Hidden like illegal substances and traded like...well...illegal substances, this was our dark secret from our parents. To go into a review of what these cards represented is pointless as so many, including Branded in the 80s, have done so already.Instead I want to talk about a perfect marragie between childhood memories and adulthood horrors. Introducing...

Lost. One Ripped Trading Card. If Found Call Department of Army (Do Not Remove Sticker, May Contain 80s).

Well, there is something on its way here to the secret volcano fort here at Culturally Significant! Hopefully this parcel will bring some much needed Halloween spirit to these hallowed halls.

I don't want to ruin the surprise, I'll be doing a review of the item when it gets here, but I will leave this here until I RETURN. 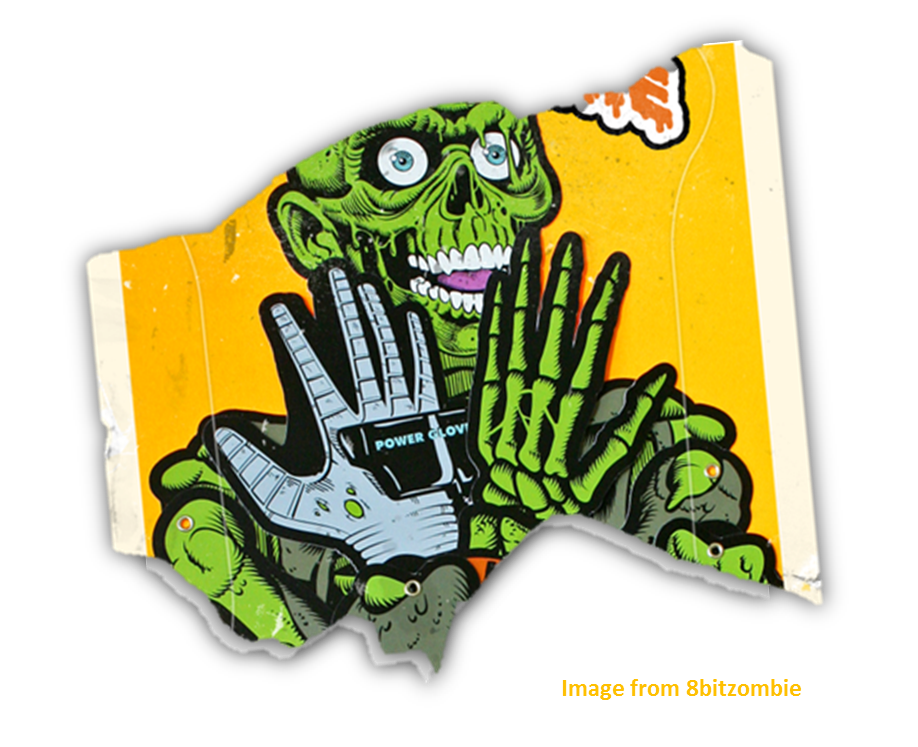 When asked recently on the Month of Macabre Photo Challenge what my favorite zombie film was I had a moment of panic.

What was my favorite zombie film?

That could go so many ways. I mean, this wasn't favorite vampire movie or favorite werewolf picture, this was zombies. A genre so beloved, so important, that paring it own became a harsh Hunger Games style death match.


Inner Thought: Did I really just name drop The Hunger Games?
Why couldn't I say Battle Royale? Or The Running Man?!
What the hell is wrong with me?

It's also a genre that is in danger of becoming bloated, tired, and slowly shambling towards the most gruesome of living deaths: mediocrity.

But I'm come here not to bury Bud, but to praise him. Let us remember the best undead that have been on the silver screen. So in that idea I present: CULTURALLY ZOMBIE! (or Zombie Significant!). 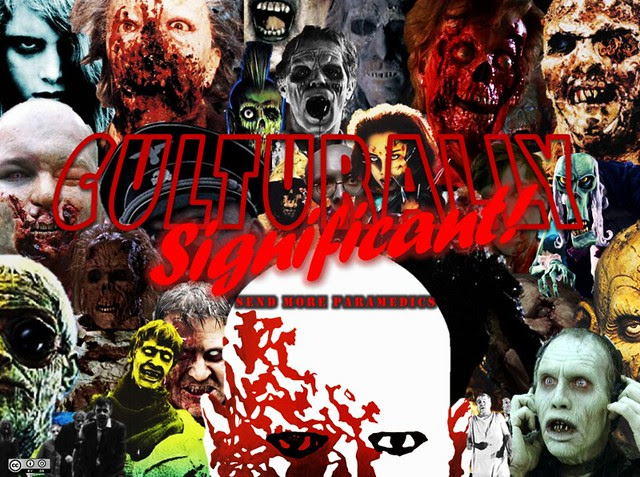 Read more »
Submitted by M.E Strange No comments:
Email ThisBlogThis!Share to TwitterShare to FacebookShare to Pinterest
Labels: Countdown to Halloween, Night of the Living Dead, zombies For many years now we have been listening to a torrent of 80’s-inspired bands, heavy on the synth sounds. There have been good and bad bands who fit this description, but they just keep coming. And that’s fine, I enjoy a number of these bands, but since my nostalgic loyalties lie more with the early 90’s than the 80’s, I have been waiting and wondering where the 90’s-inspired bands are. Sure, there have been a few here and there, but so far there’s not been a true new alt-indiepop wave.

Read more »
Submitted by Marc C. No comments:
Email ThisBlogThis!Share to TwitterShare to FacebookShare to Pinterest

OK, so I've gotten a little behind in my planning for the Culturally Significant! Countdown to Halloween. You can't blame me, with a tight work schedule and all that comes with October I've been behind on everything. Combine that with the fact that I'm also working on a feature length film I'm surprised I'm not dead yet.

That being said, I'm disappointed with my lack of updates...but that is going to change (hopefully). I thought I would make it up to by starting a regular series during the month of October called-

Here's the idea: remember all those "great" horror games we got for the Nintendo? Stuff like Castlevania, Monster Party, Zombie Ate My Neighbors, and Splatterhouse brought the red groovy into the safety of our homes and let us bash our ways through all manner of zombies or monster. It was a grand time to be young and unsupervised.

As time went on they began to extended the scope from original creations to games based off film franchises. Some were successful (Nightmare on Elm Street, Friday the 13th) while others were...well...(Jaws, Ghostbusters) less well received. The thing is, there were not as many as you would think for the period of time that saw the release of some of the greatest horror films made.

So we have mocked up versions of games we would of liked to have seen made for the Nintendo Entertainment System based off beloved  horror films or just had a general creepiness to them. Some would be good, some would be bad, but all would be ;culturally significant.

Let's get started with what I feel was the biggest miss for the game market. 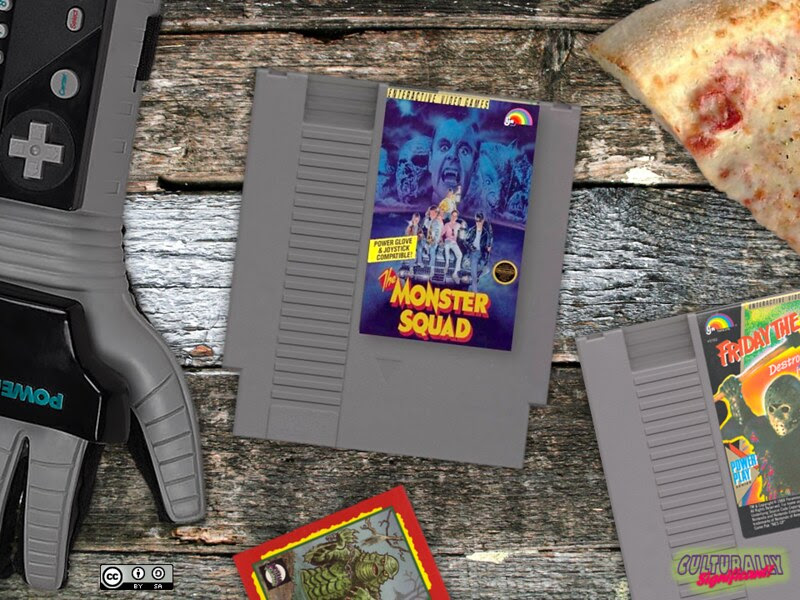 For the lucky ones of you a chill is starting to hang in the air, leaves are beginning to turn, and Pumpkin Spice Latte cups are overflowing trendy neighborhood trash cans.

This could mean only one thing...